Welcome to week 6 of the NFL. I’m Corey, co-host of the Parlay Buddy Show and the Pick’em Wars Podcast. Here’s my personal take on the 2022 NFL Season’s Week 6 spreads:

It really is too bad that Justin Fields doesn’t have a great passing game to rely on, because Washington has shown time and time again that their defense is atrocious against a good air game. Chicago’s defense has had a very hard time defending against any team with a good running game, but they shouldn’t have to worry about that, because the Commanders tend to rely (too much in my opinion) on Carson Wentz’s passing. Look for Justin Field’s to make a few improvements in the air to gain the advantage in what should be a low scoring game. My Pick: Chicago

Not a great time for groins if your last name is Bosa. That’s right DE Nick Bosa suffered a groin injury and did not practice on Monday, meanwhile, his brother Joey, with the Chargers, is out for several games with a groin injury as well. At the same time, FS Jimmie Ward has a broken hand and is questionable, and kicker Robbie Gould may be out with a knee contusion. All of that would be devastating if the 49ers were facing anyone besides Marcus Mariota on the other side of the field. SF should have little trouble maintaining a lead of at least a touchdown in this one and may very well get help from the Falcons D if they continue to take little heed of the new N.F.L.P.A. QB protections. My Pick: 49ers

The Patriots defense did something last week that no one had been able to do so far this season, they shut out the usually incredible Detroit Lions offense. Now, whether that should be a referendum on Detroit’s offensive outlook, or a glowing review of the NE defense, to me, is still up in the air. However, they have a chance to prove the latter in this game against a Jacoby Brissett who just can’t seem to get anything going with the passing game. If last week is any indicator, Nick Chubb can, and will be contained. The Patriots should bust up this spread and come out on top as dogs in this one. My Pick: Patriots

The Jets are coming off of a gangland style assassination of a very much ailing Dolphins last week, and who could blame them for walking onto Lambeau Field with confidence this week? Aaron Rodgers, that’s who… After their barren 2nd half performance and loss to the other New York team in week 5 in London, Rodgers and company will be back on home soil and in their own house. NY may have the confidence of having a so far winning season, but the Packers aren’t hurt like the Dolphins were, and Green Bay will make them work for every inch. Look for Green Bay’s running game to keep them ahead by 7. My Pick: Packers

Someone please tell me why? Why have the football gods placed this mess on my plate this week? Jacksonville seemed poised to trounce the Texans last week and managed to only put up two field goals in their loss. Meanwhile, the Colts sans Jonathan Taylor managed to beat the Broncos at home. While just four weeks ago, Jacksonville managed to provide Indy with a big, fat, juicy goose egg, don’t expect that to happen this week. I feel like the Jaguars momentum has just been stunted, and a rested Taylor should provide just the ticket for revenge. I’m calling this one for the Colts by a field goal. My Pick: Colts

Tua is definitely still out, due to the protocols put in place after that controversy, Teddy Bridgewater will also most likely remain out for at least week 6, Tyreek Hill and Jalen Waddle are both questionable. These issues by themselves are enough to question Miami’s ability to beat this spread, but when you put them all together, the prognosis is decidedly bad. It’s hard enough relying on a rookie QB, but with potentially losing your biggest weapons, the Vikings defense should be seeing this game as a veritable buffet. No need to even talk about Minnesota in detail, they should easily cover 3. My Pick: Vikings

Coming out of a tough loss against the Ravens, Joe Burrow is going to be out for blood. Add into that the fact that their defense was extremely effective in limiting Baltimore’s very dangerous Jackson/Andrews connection, and New Orleans is looking at a tough prospect. The Saints are coming off of a much-needed win, but, as Gamora asked Thanos, “what did it cost”? New Orleans’ answer just may be Chris Olave, as he is currently questionable due to a likely concussion suffered during a touchdown catch. Add to their injury list Jameis Winston, Jarvis Landry, and Michael Thomas, and I don’t see the Saints keeping this too close. My Pick: Bengals

The Giants have returned from London with a win over Green Bay and are sitting pretty with a 4-1 record so far this season. That said, they’ve had a pretty laid-back schedule, with wins over the Titans, Panthers, and Bears as well. Their defense should provide some suppression to keep the scoring relatively low, however, the Ravens should be getting Rashod Bateman back, and you can never discount Jackson’s ability to rush and Andrews’ ability to put up some big plays. The New York defense may keep it close, but I don’t see them keeping it as close as the Bengals did last week. My Pick: Ravens

It seemed like the Bucs got a bit too comfortable in the second half against Atlanta last week, and they need to avoid doing the same against the Steelers. While Pittsburgh is definitely not playing on a high enough level to be a real contender this week, it is up to Tom Brady to keep the rest of the team awake and actually playing the game. Don’t expect the Steelers defense to be able to contain Fournette or any of the top TB receivers. My Pick: Buccaneers

Matt Rhule is out, an event that literally anyone had to see coming, and the Panthers should see at least some improved morale as a result. Real results, however, will take some time, as should be completely evident this week against the Rams. We should see a concerted effort to cover Cooper Kupp, and the Rams’ run game isn’t up to winning this game itself, but as long as Matt Stafford can keep the turnovers low, he shouldn’t have a problem covering the 11-point spread. My Pick: Rams

This match-up should provide one of the higher scoring games of the week as neither defense is really good enough to stifle either offense. Rondale Moore, Zach Ertz, and Hollywood Brown will be seeing a lot of action, but Kyler Murray can keep up. It will be close, but the lack of a good supplemental runner for Murray makes me think Seattle could bust the spread. My Pick: Seahawks

Normally, the Bills defense is tuned to stop Mahomes and his deep pass rush, but with the current injuries in their secondary, it will be a lot harder to contain Kansas City. Respectively, the Kansas City defense should be able to contain Josh Allen’s longer gains through the air. Another high scoring game, and another busted spread, I’m thinking Kansas is going to win this, but boy is it going to a fun game to watch. My Pick: Chiefs

I see Dallas having a better chance covering the spread with Cooper Rush at the helm, but Prescott appears to be ready to get back into his usually starting position. Their best weapon, CeeDee Lamb will have to face down Darius Slay, so expect a stifled performance. The Hurts offense seems to be on a bit of a roller coaster, but Jalen knows how vary the use of his weapons to keep defenses off balance. I like the Eagles on the spread. My Pick: Eagles

A slew of injuries makes Russel Wilson’s outlook pretty bleak; he’s stuck in a slump and can’t rely on the battered defense to carry the extra weight. Meanwhile, the Chargers’ run game is on a tear with Ekeler, and Justin Herbert should be able to hit his targets with relative ease. 4.5 actually seems a bit low as I think the Chargers win by a touchdown. My Pick: Chargers

That’s it for my personal picks on the spread for the NFL’s Week 6 games! For more in depth opinions and analysis, make sure to check out the Pick’em Wars Podcast each week. Also check out the Parlay Buddy show on YouTube for free NFL picks. Both shows released every Friday! 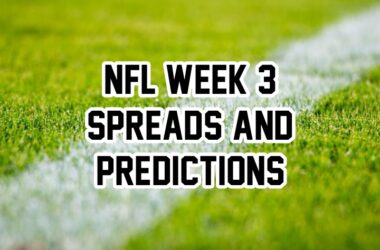 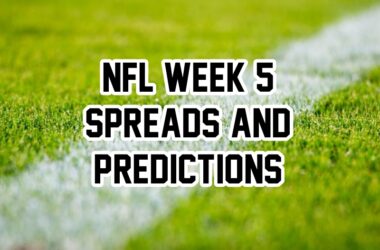 Welcome to week 5 of the NFL. I’m Corey, co-host of the Parlay Buddy Show and the Pick’em…

Welcome to week 7 of the NFL. I’m Corey, co-host of the Parlay Buddy Show and the Pick’em…